Kulik bill lays out three different sets of nutrition and food procurement standards that the state regulations would have to meet or exceed, ranging from a requirement that all food options be healthy to 30 percent healthy on the low end. 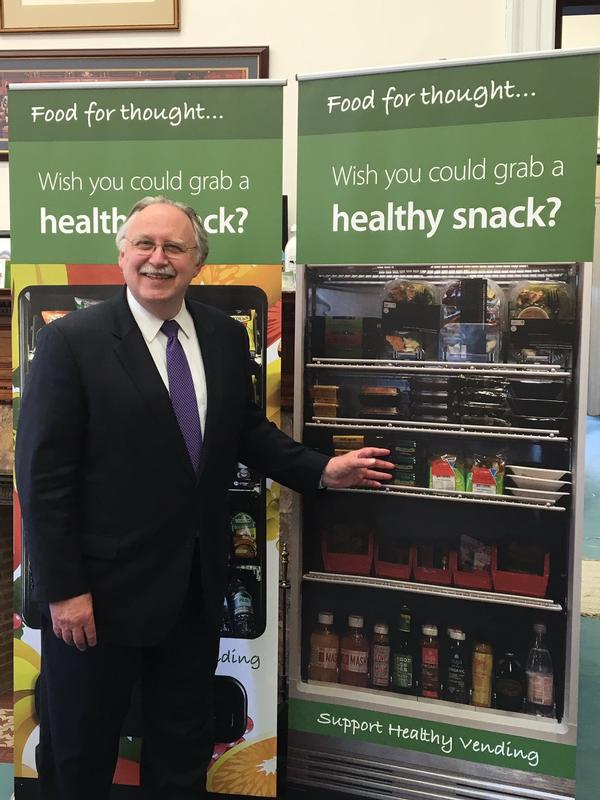 "Whole-grain Goldfish -- I didn't even know those existed," Kulik said, peering at a banner depicting a life-size vending machine stocked with snacks like crackers, pumpkin seeds, seltzer and hummus.

The banners are traveling through the State House, making stops in or outside lawmakers' offices in an attempt to drum up awareness and support for a bill that would require any food or drinks sold in vending machines on state property "be limited to food and beverage items that comply with the nutritional standards" to be set by the Department of Public Health commissioner.

Backed by the American Heart Association, the bill (H 3988) was referred to the House Ways and Means Committee in May after earning an endorsement from the Health Care Financing Committee. The bill is a Public Health Committee redraft of legislation originally filed by Kulik (H 2005) in January 2015.

"This is a bill that I have cosponsored for I think two sessions, and the support has been growing as people are more interested in healthy foods," Kulik said.

The bill lays out three different sets of nutrition and food procurement standards that the state regulations would have to meet or exceed, ranging from a requirement that all food options be healthy to 30 percent healthy on the low end. The American Heart Association advocates for the middle set of standards, which calls for 50 percent healthy contents.

Outside Rep. Louis Kafka's first-floor office earlier this week, the banners -- which display the words, "Food for thought...Wish you could grab a healthy snack? Support Healthy Vending" -- were within the line of sight of two actual vending machines stocked with soda, potato chips and candy bars.

Kulik said his current go-to snack at the State House vending machines is one that wouldn't earn a designation of health food: Reese's Peanut Butter Cups. Gesturing at the snacks displayed on the healthy vending banner, he said he thinks that choice could change with other options available.

"You know, if there was some dried fruit for example, that would be a great opportunity," the Worthington Democrat said. "I see some granola bars and things in here that I would reach for, some packages of nuts. It would be great. I would be happy to buy those."