Should maple syrup be the state’s official sweetener? Rep. Stephen Kulik thinks so

A bill filed by Rep. Stephen Kulik would add maple syrup as an official state emblem. Kulik said his district is home to several maple syrup producers and called the sugaring industry a growing part of the state’s agricultural economy. 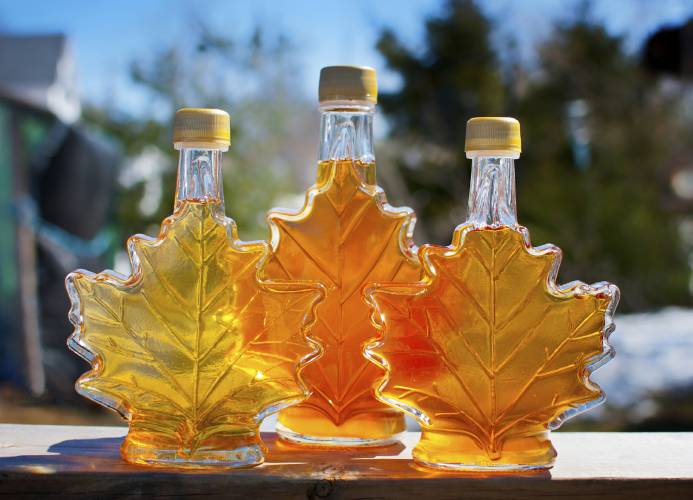 BOSTON — Massachusetts has an official state cookie, state bean, state doughnut and state beverage, and lawmakers now have a chance to decide if it should have an official sweetener, too.

“We have many sort of official this-or-that, official muffin, official cookie, official pie, official whatever of the commonwealth,” Kulik said. “It’s kind of whimsical in a way, but it also furthers the public’s attention of an important agricultural product.”

Kulik, a Worthington Democrat, said his district is home to several maple syrup producers and called the sugaring industry a growing part of the state’s agricultural economy.

According to the Massachusetts Maple Producers Association, there are over 300 maple producers in the state, generating an annual $6 million to $8 million in sales of pure maple products.

“And then there’s a lot of ancillary economic benefits like tourism. Lots of people go out and visit sugar houses in the spring,” association coordinator Winton Pitcoff said. “Some are open year-round, there’s about a dozen that have restaurants that are open during the sugaring season, so there’s a lot of business there as well.”

Pitcoff, himself a hobbyist sugarmaker, said maple producing lets farmers earn extra income in what’s otherwise their off-season. Some farms here have been making maple syrup for hundreds of years, tapping the same trees for generations, he said.

Kulik’s bill (H 3735) would declare “pure Massachusetts maple syrup” the state’s official sweetener — a step similar to one already taken in Maine, Pitcoff said — and designate the month of March as Massachusetts Maple Month, which is typically done each year through gubernatorial proclamation.

A versatile ingredient that can top pancakes or French toast, flavor ice cream or whiskey and glaze chicken or carrots, maple syrup is officially categorized by the U.S. Department of Agriculture as a sweetener, Pitcoff said.

Kulik said he usually buys “a couple of gallons a year for my own consumption at my house” — plus maple products to give as gifts — and uses it to sweeten the oatmeal he often tops with nuts or raisins as a standard cold-weather breakfast. He and his wife also sometimes swap it in for corn syrup and sugar when making pecan pie.

The House on June 1 referred Kulik’s bill to the Joint Committee on State Administration and Regulatory Oversight, where it will be considered along with several other legislative attempts to establish new state icons.

Competing bills would designate the state’s official shellfish. While Kingston Rep. Tom Calter wants it to be the oyster, Taunton Sen. Marc Pacheco would bestow the honor upon the quahog.

Rep. James Murphy of Weymouth would make Bell’s Seasoning, manufactured in his hometown, the official seasoning, Rep. Jay Livingstone wants to see gingham become the official textile, and the black swallowtail — already the state butterfly in New Jersey and Oklahoma — could win the same designation here under a Rep. Daniel Donahue bill. Sen. Joseph Boncore filed legislation that would make Boston’s Rose Fitzgerald Kennedy Greenway, the park that was formed after the interstate in Boston was moved underground during the Big Dig, the state’s official “organic public park.”

The Boston cream pie cupcake, Gov. Charlie Baker’s go-to wager against his counterparts in other states during major sports events, could end up the official state cupcake under a Rep. Angelo Puppolo bill.

Rep. David Linsky has picked up the cause — prominently championed by Boston Mayor Martin Walsh during his time in the House — of trying to name Jonathan Richman’s “Roadrunner” the state’s official rock song. Also on the musical front, a Rep. Thomas Stanley bill would make “14 Counties of Massachusetts,” as recorded by the third- and fourth-grade classes at Our Lady’s Academy in his hometown of Waltham, the “official county song.”