Shutesbury hopeful to be broadband connected by 2019

The Massachusetts Broadband Institute allocated $870,000 for the purpose of bringing broadband internet to Shutesbury. “It has been a hard struggle,” Kulik noted. “It’s a partnership, and towns have been frustrated for a long time.” 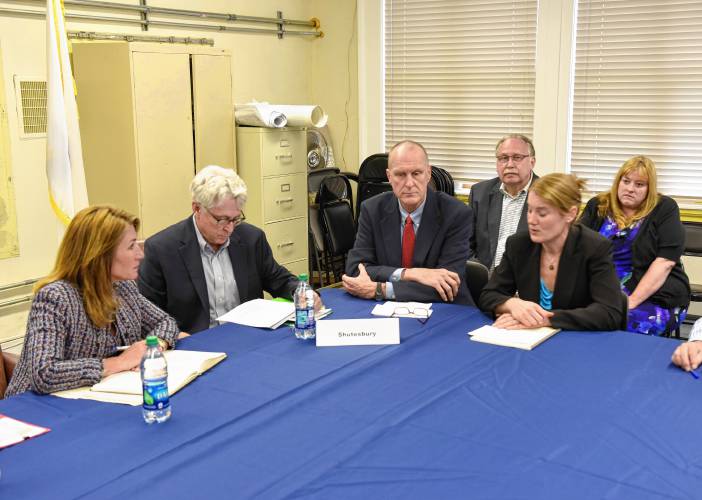 “What we have found is leverage — the pressure that (Carolyn Kirk, deputy secretary of the Massachusetts Housing and Economic Development) has — is a lot more effective when the state is speaking for us than when Bob is speaking for Leyden,” said Robert Ryan, of Leyden’s Broadband Committee to Polito and peers from Shutesbury, Colrain, New Salem and Wendell. Also in attendance was Rep. Stephen Kulik, D-Worthington; Kirk; and Peter J. Larkin, chairman of the quasi-public Massachusetts Broadband Institution. The MBI was created under Gov. Deval Patrick to bring broadband to underserved towns in 2008.

“I’ve heard the stories. Whether it’s the difference of working from home or not, or just from a public safety standpoint, this has to get done,” Polito said.

“It has been a hard struggle,” Kulik noted. “It’s a partnership, and towns have been frustrated for a long time.”

Polito’s visit comes on the heels of more than $15 million in state broadband grants announced this year — the latest financial infusion in a years-long drama to bring viable internet infrastructure into the region.

Looking ahead, “We will have every community on a pathway to connection by the end of the year,” Polito said.

During the talk, regional leaders emphasized the enormous amount of work Franklin County residents have invested into the initiative, and thanked Polito for the state’s pledge of financial help.

The contract outlines that at least 96 percent of the residences in those towns be connected to broadband when all is said and done. However, because two-thirds of the work is paid for by local taxpayers, Ryan said, “We’re hoping to wire all of the houses. If the town is going to be paying from its tax base, we feel compelled to bring in broadband to all of the community.”

In Shutesbury’s case, Gayle Huntress estimated it will cost about $2.5 million in total to build out the town’s network. To that end, Huntress, a broadband committee member in Shutesbury, said town officials intend to hire Westfield Gas and Electric, owned and run by the town of Westfield, to plan and begin the build out process. Huntress praised the current administration’s efforts and said work is expected to be complete by 2019.

Over the years, the region’s lack of broadband infrastructure has forced residents to purchase expensive and spotty satellite internet service or physically transport their computers to places that are connected, the lieutenant governor and others were told.

“People drag home computers in here to get an update,” said Shutesbury Broadband Committee member Steven Schmidt, standing in the town hall after the discussion. He described the years-long process as “very frustrating.”

“Initial efforts began in the early 2000s, but it really took off a few years ago,” said Craig Martin, another Shutesbury committee member. “Looking to the future, we’re thrilled that things are moving. There are a lot of entrepreneurs out here, and that will increase.”

You can reach Andy Castillo