In 2008 legislators passed a law offering dairy farmers a tax credit to “offset the cyclical downturns in milk prices ” capped at $4 million annually. Rep. Stephen Kulik filed a bill to double the annual cap on the tax credit 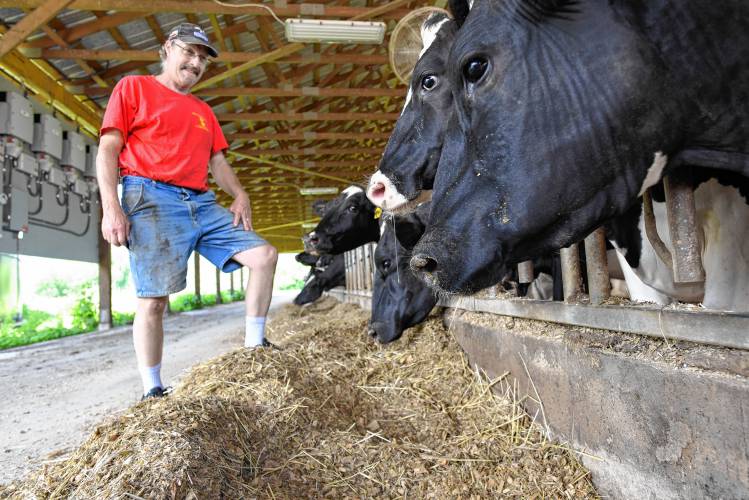 BOSTON — Massachusetts dairy farms are a bucolic reminder of the state’s more agricultural past and while technology and development have raced ahead, the money paid to milk producers has not followed the same trajectory.

“Our prices today I’d say are probably about the same as our price was 20 years ago,” said Mark Duffy, of Great Brook Farm in Carlisle, after testifying before the Revenue Committee on Tuesday.

In 2008, Bay State legislators passed a law offering dairy farmers a tax credit to “offset the cyclical downturns in milk prices paid to dairy farmers,” which was capped at $4 million annually.

Duffy on Tuesday asked lawmakers, who are struggling with budget imbalances, to advance a bill to double the annual cap on the tax credit to $8 million.

Darryl Williams, whose family farm in Hatfield dates back to 1661, said the tax credit is only available to farmers when the cost of producing milk exceeds the price farmers receive.

“Pretty much everything’s gone up except of the price of milk,” said Williams, the treasurer of the Massachusetts Dairy Promotion Board.

Catherine de Ronde, an economist who used to run the tax credit program for the state and now works for the dairy cooperative Agri-Mark, told the News Service the cap was reached the past two years and the tax credit was insufficient to cover farmers’ losses.

“At the $4 million cap, farmers are still losing money,” said de Ronde, who said that even if the cap is doubled “they would still be losing money.” She said, “Farmers do not have any direct control over their price.”

Duffy said the prices of dairy products straight off the farm are loosely correlated to the price of milk on supermarket coolers, but their product also gets used for butter, cheese, yogurt, and other products. Last month, Duffy said, he was paid $1.51 per gallon of milk produced on his farm.

The legislation (H 2616) was filed by Worthington Rep. Stephen Kulik. The late Rep. Gailanne Cariddi, of North Adams, filed an amendment to the House budget in April to double the dairy farmer tax credit. The amendment was withdrawn from consideration.

At his working farm, Duffy said, passersby will often stop to look at the activity and take photos. If farms go out of business the properties will be converted into parking lots and stores, he predicted.