Kulik said he was “disappointed” that the DPU failed to look at ordering any short-term solutions. “Our constituents are wanting service and they’re left without any solution. It’s very difficult for our region not to have that gas supply there.” 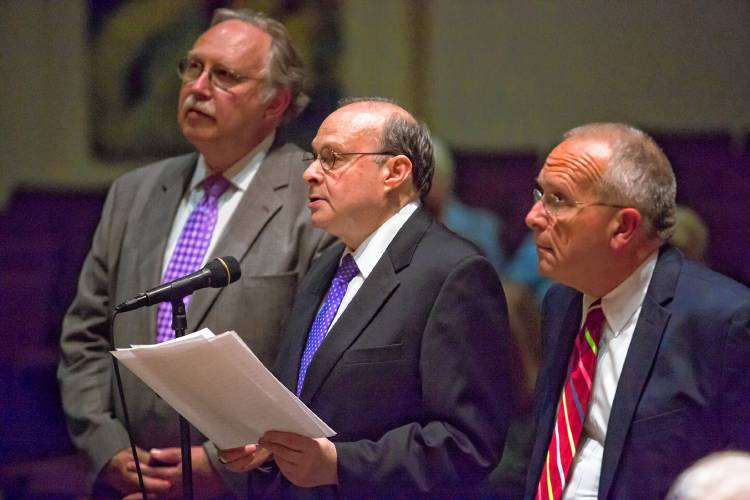 The state Department of Public Utilities has approved a long-term supply plan for Berkshire Gas Co. without requiring the company to end its 3-year-old moratorium on new and expanded service in Franklin and Hampshire counties.

While the DPU says it “acknowledges that there is an urgent need to end the moratorium as soon as practicable,” it partially or entirely rejects recommendations by the towns of Deerfield and Montague, which formally intervened in the company’s filing.

“On behalf of our residents and businesses, we are disappointed, though not surprised, by the … (DPU’s) substantive agreement … that will allow the moratorium on new or expanded service throughout the Pioneer Valley to continue for an indefinite period of time,” the towns said in a joint statement. “The DPU’s order fails to incentivize Berkshire to work harder to support our goals as Massachusetts Green Communities, which are to boost economic development while at the same time reducing overall consumption of gas in order to continue putting the brakes on climate change.”

In its decision, the DPU rejected testimony on behalf of the two towns that a combination of demand-reduction solutions, internal system changes and improvements to existing gas infrastructure could eliminate need for the moratorium as early as the coming heating season this fall.

While regulators required the company to report every six months on its progress toward finding a long-term supply solution, state Senate President Stanley Rosenberg said, “We wish it was every 30 days.”

The two towns’ solutions had called for restructuring the company’s contracts with some large customers to free up more gas at times of peak demand as well as changes in its operating procedures and forecasting methods and improvements to the Greenfield feedline. The plans were presented by Boston attorney Richard Kanoff and endorsed by the legislators — who were granted limited interevenor status in the case.

One of the towns’ recommendations that was incorporated into the decision included the requirement that separate demand forecasts and supply plans be included for the company’s Berkshire and Pioneer Valley divisions in the future.

The recommendation also encouraged the company to work with its “dual fuel” customers to see if they would make arrangements to shift fuels at time of winter peak demand to free up resources for other customers to use.

Rosenberg, who has been meeting with Berkshire Gas officials together with other area legislators, said the DPU “pushed through a little bit, but not as much as we wanted.”

“We take little heart in what the DPU did, but we wish it had been more directed,” Rosenberg said, adding that legislators will continue to “keep the pressure on” for the company to pursue all options to ending the moratorium.

State Attorney General Maura Healey, who also called for the company to end its moratorium, issued the following statement, through Assistant Attorney General Chloe Gotsis: “We understand the economic hardship that this moratorium is continuing to have on families and businesses in the Berkshire Gas service territory. We encourage the company and other stakeholders to continue to have discussions around developing a long-term cost-effective solution to ending the moratorium in a way that is clean and affordable.”

Ariel Elan, a member of Montague’s Energy Committee, said the towns, through Kanoff and their expert witnesses, had recommended that Berkshire Gas be required to work with large customers that could switch to alternative fuels — such as Amherst College.

That Tennessee Gas Pipeline Co. recently completed an “open season” soliciting potential customers for an undetermined possible project somewhere in the region is also looming in the background as Berkshire Gas weighs two solutions for ending the moratorium — a large liquefied natural gas storage facility somewhere in Franklin County and expansion of its distribution main between Greenfield and TGP’s interconnection with the Berkshire’s system in Southwick.

“The fact that this thing is hovering in the air is extremely relevant,” said Elan, who was active in opposing TGP’s proposed Northeast Energy Direct pipeline through eight Franklin County towns before it was scrapped last year. “As communities, we can’t know what Berkshire Gas and its parent company, Iberdrola, has in mind, but we’ve certainly learned about the risks of having a large pipeline project go through the area, so we’re on high alert and we’ll keep a watchful eye on any new infrastructure that’s proposed.”

He said both of the company’s options to augment supply in the Pioneer Valley “have been the subject of extensive analysis and evaluation” and that the company plans to provide the DPU with an update on its progress toward a long-term solution within six months.

But, he added regarding, TGP’s plans, “neither of the options under consideration would be relevant, as the existing lateral is at capacity and any expansion of that facility would be cost prohibitive. … Absent such a facility having been proposed, permitted and approved by regulators, it wouldn’t make sense to sign binding contracts and have to pay for long-term capacity that ultimately cannot be used, especially if the LNG option proves to be more viable.”

Rep. Stephen Kulik, D-Worthington, said the current moratorium “certainly puts our residents and businesses at a great economic disadvantage. We’re told there’s a very long waiting list” for new and expanded gas service. “Our constituents are wanting service and they’re left without any solution. It’s very difficult for our region not to have that gas supply there.”

Kulik said he was “disappointed” that the DPU, in its decision, failed to look at ordering any short-term solutions to the moratorium, pointing out that either of the solutions “are a long ways away” because of siting and regulatory approval required. “It could be years.”

He added, legislators have also asked Berkshire Gas specifically whether the company expects TGP’s most recent interest in this region to be seen as a solution, but they have been told, “It means absolutely nothing; it’s apples and oranges,” in Kulik’s words.

You can reach Richie Davis at